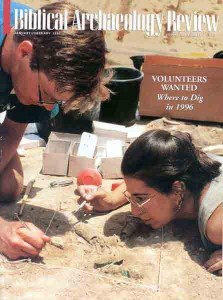 BAR is again offering travel scholarships to those who wish to volunteer on a dig. Last year’s winners—Tina Buker, an elementary school art teacher in Washington, D.C., Heidi Cron, a master’s student in theological studies at Harvard Divinity School, and Yisrael Dubitsky, a Bible and library student—share their experiences with us.

Last summer’s dig at Tel el-Ahwat, 9 miles east of Caesarea, presented us with a puzzle: During the early Iron Age (c. 1200 B.C.E.), an unusually strong wall, measuring 13 feet wide by 33 feet high, surrounded el-Ahwat, the northwestern-most Israelite settlement in the region of Manasseh. No other Israelite city is known to have had such a wall in this period, when the Israelites were not at war. So why such a sturdy fortification?

“Maybe the city was a prison,” I suggested. “Maybe the wall was used to keep people in, rather than out.” Everyone laughed and told me that only an American would think of such an idea. I had to agree.

Zoo, leper colony … We continued to propose fantastic identifications for the city and to scour the Bible for passages to support our theories. Finally, we scratched all our thoughts and theories onto one sheet of paper, which we slid into the wall for the next explorer to decode.