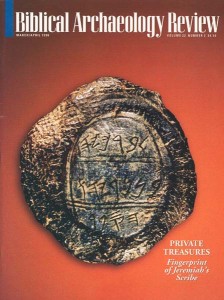 So Far No Cigar

They’ve found coins and pottery and arrangements of stones that may explain where the Qumranites resided, but no scrolls. That may change, however, by the time you read these words.

It’s always been a puzzle—where the Dead Sea Scroll people lived. The settlement at Qumran has been extensively excavated, but no domestic quarters have been discovered. The famous dining hall—the largest room in the complex—explains where they ate communal meals, but where did they sleep?

An expedition that still hopes to find scrolls may have the answer.

Hanan Eshel, a young Israeli archaeologist who probably knows the site and its environs as well as anyone, was walking the area trying, like others before him, to see if he could find paths from Cave 1, where the Bedouin found seven intact scrolls nearly 50 years ago, leading to the settlement. Hopefully, this would confirm once and for all that the caves where the scrolls were found were related, literally connected, to the settlement. But any possibility of finding these paths was eliminated by the Israeli army’s training in this area; if any ancient paths were to be seen leading from Cave 1, over a mile north of the settlement, the army equipment had long ago obliterated them.