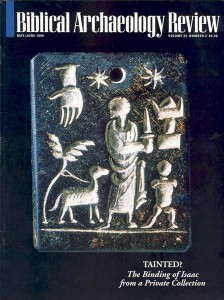 Of the thousands of limestone ossuaries, or bone boxes, found in and around Jerusalem, at least one depicts the facade of the Temple—this from a time when that magnificent structure still stood on the Temple Mount in all its splendor.

For about 100 to 150 years before the Roman destruction of the Temple in 70 C.E., Jews in the Jerusalem area practiced ossilegium, or secondary burial: About a year after the initial burial, when the flesh had decomposed, the bones of the deceased were placed in a small stone box, called an ossuary. Ossuaries were often decorated, generally with geometric designs (such as various kinds of rosettes), or at times with plant motifs or with architectural elements such as columns, ashlars (courses of shaped rectangular stones) or parts of a building. No human faces or figures were represented because of the Second Commandment’s prohibition, as interpreted at the time, on the making of graven images.