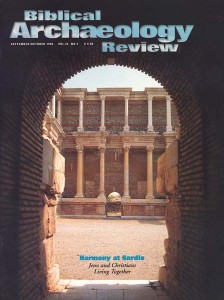 The Balm of Gilead

“Whoever reveals the secret of the village to the gentiles,” warns an Aramaic mosaic inscription on the floor of Ein Gedi’s fourth-century A.D. synagogue, “the one whose eyes roam over the entire earth and see what is concealed will uproot this person and his seed from under the sun.”

Is this an oath, sworn by members of the ancient Jewish community of Ein Gedi, an oasis on the western shore of the Dead Sea? And if so, what was the oath meant to protect? What was so valuable that the ultimate curse of divine retribution was to be brought down upon squealers?

These questions have puzzled scholars ever since the synagogue’s mosaics were accidentally uncovered 25 years ago by a bulldozer clearing land for a kibbutz.

Now, at last, Israeli archaeologist Yizhar Hirschfeld thinks he’s found the answer—lying concealed within the walls of a heavily protected stone tower: The solution to the mystery may involve what Ein Gedi had long been famous for in antiquity: the production of that rare, fragrant, intoxicating unguent—balsam oil.