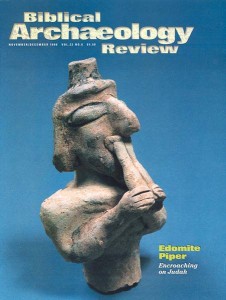 Like many peoples mentioned in the Bible but otherwise almost unknown, the Edomites are coming to life through the wonders of archaeology. Ironically, however, some of the most dramatic finds are being excavated in Israel rather than in the Edomite homeland east of the Arava, the valley that extends from the southern end of the Dead Sea to the Gulf of Eilat.

The origins of the Edomites, like those of the early Israelites, remain obscure archaeologically. They seem to have emerged as a people about the same time as the Israelites, in the period archaeologists call Iron Age I (1200–1000 B.C.E.).

Unlike the Israelites, however, the Edomites have left us no literature comparable to the Bible. Therefore we know them 030largely from their material culture as dug up by archaeologists. The land of Edom lay in present-day southern Jordan, bounded on the north by the Wadi Hasa (Biblical Nahal Zered) at the southern end of the Dead Sea, and extending south to the Gulf of Eilat (also called the Gulf of Aqaba). Most of this terrain is an upland plateau rising to about 4,000 feet above sea level. The northern part of the plateau is volcanic and cut by dry gullies and valleys; the southern part is made up of sandstone hills. Most of the Edomite sites lie in the northern part, which has more rainfall, many springs and soil suitable for agriculture.