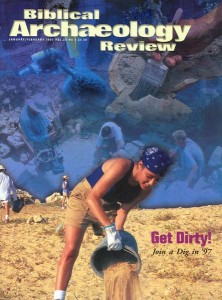 Slowly it emerged from the ground: a beautiful, 8-inch-long bronze incense shovel, the prize find of the 1996 excavations at Bethsaida, near the northeastern shore of the Sea of Galilee.

The shovel lay in a first-century C.E. refuse pit. Just a few meters away is the corner of a building. In part because of the shovel, we have tentatively identified the building as a Roman temple. Situated on top of the mound, the building is oriented in an east-west direction and has a ground plan typical of Roman temples—a porch with at least one column at the center, a pronaos (approaching hall), a naos (the holy of holies) and an opisthodomus (back room). Among the debris were decorated stones and figurines, which also lend support to our identification of the building as a temple.

X-rays reveal that the shovel was cast in one piece, probably using the the lost-wax (cire perdue) technique, in which molten metal is cast in a mold formed with the use of wax.

The shovel has a handle shaped like a Corinthian capital and a rectangular pan decorated with two small leaves, resembling a horned altar. The pan itself is also engraved with five concentric-circle designs, perhaps not just for decoration.