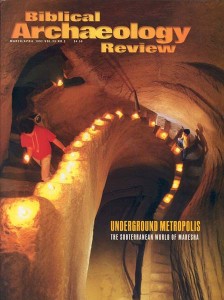 In the script chart above, I have drawn examples of a number of letters. This chart, I believe, allows even the untrained eye to see evolutionary changes that permit paleographers to date scripts typologically. The top line, from right to left, presents characters in Old Hebrew script of c. 700 B.C.E.: ’alep, he, kap, lamed, mem, and qop. The bottom line, again from right to left, presents the same characters in the paleo-Hebrew script of the late first century B.C.E. (in the shaded area are the modern Hebrew equivalents and English transcriptions). The Old Hebrew letters are drawn from the Siloam tunnel inscription; the paleo-Hebrew letters are drawn from the manuscript 11QLev (the Leviticus manuscript from Cave 11 at Qumran).