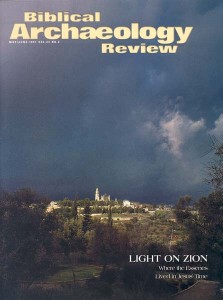 Moses Shapira’s mysterious Deuteronomy fragments created such a stir in London that the British Museum put them on public display even before their authenticity could be evaluated. Scholars from across Europe and such public figures as the British Prime Minister, William F. Gladstone, lined up for a peek at these overnight sensations. How could such obscure objects—usually of interest only to scholars—have been the cause of an early media frenzy?

The excitement over the strips may be attributed to the state of Bible scholarship in the late 19th century. The year 1883, when Shapira offered his manuscript for sale to the museum, was also the date of the publication of the second and definitive edition of Julius Wellhausen’s Prolegomena to the History of Israel.a In this work, the German Bible scholar argued that the law of Moses dated not to beginning of the development of the religion of ancient Israel but to the end—to the close of the monarchy in the late seventh century B.C.E.

Wellhausen maintained that the Pentateuch, or the Five Books of Moses, was a compilation of four originally independent documents, which he identified as J, the Yahwist source (after this source’s use of the divine name Yahweh, in German, Jahweh); E, the Elohist source (for the use of the divine name Elohim); D, the Deuteronomic source (the narrative source of the Book of Deuteronomy); and P, the Priestly source (the source for many of the cultic regulations found in Leviticus). According to Wellhausen, D was a relatively late component, originating no earlier than the religious reforms instituted by King Josiah of Judah in 622 B.C.E.