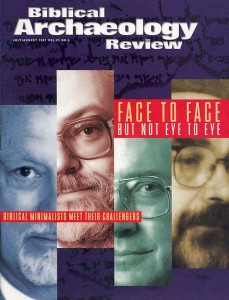 Long-time readers of BAR are familiar with names such as Albright, Petrie, Glueck, de Vaux and Kenyon, pioneers who helped shape the field of Biblical archaeology. There are, however, a number of scholars who made important contributions in their day but who are often as little known to professional archaeologists today as they are to lay readers. William Frederic Badè is one of these.

Badè spent five seasons (1926, 1927, 1929, 1932 and 1935) excavating the eight-acre site of Tell en-Nasbeh, seven miles northwest of Jerusalem, the site usually identified as the Biblical town Mizpah of Benjamin. Mizpah was an important site in the period of the Judges and the early Monarchy. The tribes of Israel gathered there for their war with Benjamin (Judges 19–20); along with Gilgal and Bethel, it was on Samuel’s yearly circuit (1 Samuel 7:16), and Saul was elected king there (1 Samuel 10:17–24).

By the time Badè finished, he had excavated approximately two-thirds of the site, most of it down to bedrock. Tell en-Nasbeh is the most broadly excavated site of its size ever investigated. It has much to teach us about how an ancient society organized itself spatially.