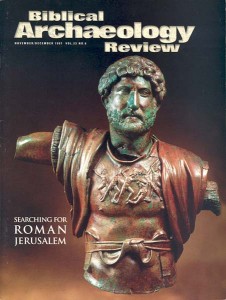 Unlike the First Jewish Revolt against Rome (66–70 C.E.), which was chronicled in detail by the first-century historian Josephus, the Second Jewish Revolt, the so-called Bar-Kokhba Revolt (132–135 C.E.), is known only from scraps of ancient literature.1 Archaeology alone can fill in the gaps. And it has been doing so in an amazing way in recent decades.a

One of the mysteries surrounding the revolt involves the founding of the city Aelia Capitolina, the name the Romans gave to Jerusalem. Did the Romans establish Aelia Capitolina before the Bar-Kokhba Revolt, thereby inciting the Jews to revolt? Or did they establish it after the revolt and exclude the Jews from the city as punishment? Scholars, as might be expected, have taken two views. Recent numismatic evidence—coins from the Judean desert—may provide the answer.

The first view, that the founding of Aelia Capitolina preceded the revolt, is supported by the Roman historian Dio Cassius. In 130 C.E. Emperor Hadrian (117–138 C.E.) made a tour of his eastern lands, traveling through Judea, Arabia and Egypt before returning to Rome. According to Dio, Hadrian founded Aelia Capitolina during this journey.2