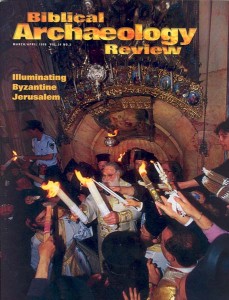 The Bible is the fault line that divides a significant segment of the scholarly world. It is the attitude toward the Bible that underlies the disparate battles, both institutional and substantive, that are being fought as I write. The fissures are deep.

For 13 years, since 1985, I have been reporting on the Annual Meeting in every March/April issue of BAR. Each year I tell newcomers that the term refers to the joint annual meeting of the American Academy of Religion (AAR), the Society of Biblical Literature (SBL) and the American Schools of Oriental Research (ASOR).

That is no longer true. ASOR, the premier American organization of professional archaeologists specializing in the ancient Near East, has withdrawn from the Annual Meeting and, for the first time in memory, held its meeting by itself. The reasons, as might be expected, are complicated but not surprising. They involve money, personalities, institutional pride—and the Bible!

ASOR held its separate meeting this year in Napa, California, a two-hour drive from San Francisco, where the Annual Meeting would be held a week later—as usual, from the Saturday to the Tuesday before Thanksgiving.