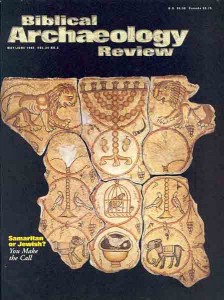 With all due respect to my distinguished colleagues Frank Moore Cross of Harvard University and Esther Eshel of Hebrew University in Jerusalem, their reading of the recently excavated and already famous ostracon from Qumran is, in a word, impossible.

If their reading were correct (see “The Missing Link,” BAR 24:02), it would indeed provide the “missing link” between the settlement at Qumran and the Dead Sea Scrolls discovered in 11 nearby caves. For, according to their reading, the inscription on the two pieces of broken pottery records a deed of gift “to the Community” (the Yahad, in Hebrew) in fulfillment of an oath. In the scrolls, the sectarian community regularly refers to itself as the Yahad. If they are Essenes, as Cross and Eshel contend they are, the donor of the gift would be making the gift as part of his initiation into the Community, as specified in the scrolls. Almost too good to be true? Alas, it is.

I agree with Cross and Eshel that “whoever wrote the text on the sherd was not a very skilled scribe because it is quite crudely inscribed.” I also agree with them that the text is a draft of a deed of gift.

But I emphatically disagree with their reading of the crucial line 8. There is nothing there about an oath “to the Community.” This is simply a deed of gift 046of an estate and all the trees on it. We also disagree about much else in the text (they see much more in this very badly worn text than I do), but these differences are relatively minor compared to our differences concerning line 8. In the box above, their translation and my translation are printed side-by-side (together with their reconstruction of the Hebrew text and mine; incidentally, a dot above a letter indicates it is unclear and therefore questionable). Despite our differences, we agree that one Honi (HNY) “gave” some property with fig trees and another kind of tree (they think it is olive; I believe it may be palm, but only the first letter survives) to one ’El‘azar.

Then comes line 8. They say that the gift was made to “fulfill” an oath “to the Community.” In my view, it is simply a continuation of the list of trees in line 7. I read line 8 as follows: “and every othe[r(?)] tree.”

Let us look more closely at line 8. You can see more in the two different photographs in the box (above) than you can by looking at the ostracon itself. The modern Hebrew letters of both of our interpretations appear above the photographs from which we worked. Beneath these are a drawing by Cross and Eshel from their article in the March/April 1998 BAR and my drawing (see “The Missing Link,” BAR 24:02). Below them are our respective transliterations and English translations.

Readers who know Hebrew may question the waw () in the spelling of the first word, “every” or “all,” Hebrew KWL (). Often this word is written without the vowel sign waw (called a mater lectionis). However, this spelling, with the waw, is not uncommon at this time. It appears, for example, in the Dead Sea Scrolls.1 Another peculiarity is the nun () at the end of the second word in my drawing. It is a medial nun instead of the expected final nun. Although this is not common at this time, some scribes did not regularly distinguish between medial and final letter forms.

In my technical article on this ostracon, I analyzed the direction and order of the strokes in several letters (scholars call this ductus), which helps to distinguish various letters. Here, however, I will call attention only to a couple of clear errors in the Cross-Eshel drawings. Look at the last three letters in their drawing of line 8 (remember Hebrew is read from right to left). These are the letters that supposedly spell Yahad. The letter they identify as a yod () looks like an inverted V in their drawing. Compare the size of the clear yods in lines 1 and 7 with it, look closely at the photographs, and then look at my drawing of this letter. It is clear that it is a nun (), not a yod. Now look at the next to last letter in the line, which they identify as a (); clearly, it is an aleph (). Though it is true that in cases of extreme cursive writing, this could be a , it is surely not a as written by this scribe. There is a very clear in this ostracon in line 2 in the toponym Jericho. About this there can be no question.2 Compare it to the alleged in line 8 as proposed by Cross and Eshel. It is entirely different. Now look at the in the name ’El‘azar in line 3; it is the same as the next-to-last letter in line 8.

Cross and Eshel also misinterpret the beginning of this crucial line: Look at the fourth and fifth letters from the right (lamed [] and aleph) in my drawing of line 8. Cross and Eshel mistakenly attached the right part of the shoulder of the lamed to the preceding waw, which created a mem (). This lamed was not the only letter they cut in half; they did the same thing with the aleph. By 047cutting the aleph in half, they interpreted the halves as waw and taw (). The result in their interpretation is what can only be described as a ghost word: WKMLWTW, which they translate “when he fulfills (his oath).”

My decipherment of the line—“and every othe[r(?)] tree”—fits perfectly with the context of the document and is similar to lists regularly occurring in deeds of conveyance found in the Judean desert. For example, a deed of sale from Wadi Murabba‘at includes the expression “the fig trees, the olive trees, the tree(s).”3 A lease includes the expression “and every tree within them.”4 Another lease provides for “the palms and the rest of the trees within them.”5 A deed of gift includes “all palms and trees.”6 A deed of sale provides for “palms and sycamores and trees.”7 My reading of the Qumran ostracon is thus consistent with common expressions in other conveyances from the same general area and time. As one can see, even though the formulation is not identical, the general structure of the deeds is similar. As evidenced in the documentary texts from the Judean desert, the scribes allowed themselves a certain freedom in formulating the deeds.

In short, Cross and Eshel have clearly misread this ostracon, and therefore their interpretation is misleading. This ostracon cannot be used to relate the people who wrote the scrolls to those who lived at Qumran.

Dots above a letter indicate that the reading of the letter is uncertain.

Dots above a letter indicate that the reading of the letter is uncertain.

A crucial disagreement about the translation of the Qumran ostracon occurs over the last three letters in line 8 (reading right to left). Frank Moore Cross and Esther Eshel, who translate the line as “when he fulfills (his oath) to the Community,” read these last three letters as yod (), () and dalet (). Ada Yardeni, however, who translates the line “and every oth[er(?)] tree[…],” reads these as nun (), aleph () and possibly . The two critical letters are the third and the second from the left—Cross and Eshel’s yod and , Yardeni’s nun and aleph. For the first letter, their difference lies in what they see in the photograph. For the second, they see pretty much the same thing but disagree on what letter it represents.

Yardeni also disagrees with Cross and Eshel on how to read the beginning of the line. Yardeni reads the third letter from the right as a waw (); Cross and Eshel see it as a mem (). Yardeni contends that they get this mem by taking part of the following lamed () and attaching it to the waw. She thinks they make a similar mistake finding a waw and a taw () after (to the left of) the lamed; she believes it’s an aleph that they’ve split in two.

translation: when he fulfils (his oath) to the Community ]

What Letters Are These?

The Character Third from the End of Line 8

Yardeni does not agree with Cross and Eshel on what the third character from the end of line 8 looks like; their drawings of it are very different. She reads a nun (), where they read a yod ().

While the character Yardeni draws here must be interpreted as a nun, the situation is not as straightforward for the character Cross and Eshel draw. Their inverted V is not obviously a yod. Compare it, for instance, with the other characters they themselves, as well as Yardeni, have positively identified as yods (below).

The Character Second from the End of Line 8