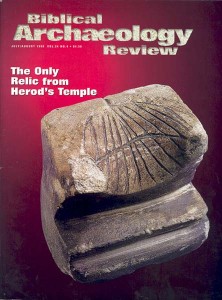 The history of Jerusalem is going to have to be rewritten. As we gradually assimilate the archaeological record, we are finding more and more evidence that calls into question long-held assumptions about the city’s past. This is especially true of the three periods I will discuss here, which are already the subject of heated debate: the Late Bronze Age, Iron Age I and the beginning of Iron Age II. The history of these periods is particularly sensitive in that it ultimately involves the historicity of the glorious reigns of David and Solomon—at least, according to the Bible—and the existence of the United Monarchy of Israel.

The Late Bronze Age (1550–1200 B.C.E.) is the period just before Israel, whatever its actual nature, began to emerge in the hill country of Palestine. Iron Age I (1200–1000 B.C.E.), the period of the Judges in Biblical terms, is the era just before the 12 Israelite tribes supposedly united. The beginning of Iron Age II encompasses the United Monarchy. David’s “conquest” of Jerusalem is usually dated to about 1000 B.C.E. According to the Bible, David and Solomon each reigned 40 years.

What was Jerusalem like in the period before the emergence of Israel? What was it like during the 200-year period of the Judges, when, according to the Bible, Israel was unable to possess Jerusalem? (Though the Israelites conquered the city, they apparently could not hold it [Judges 1:8].) How much of the stirring account of David’s conquest is historically accurate? Did a city of any note exist there during the time of David and Solomon?