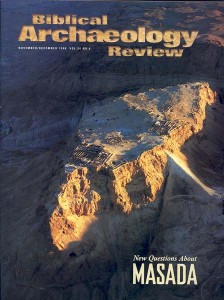 On July 7, 1969, with due solemnity, the earthly remains of the last defenders of Masada were buried near the foot of the Roman ramp leading up to the site. The chief chaplain of the Israeli army, Rabbi Shlomo Goren, officiated. The dead were buried with full military honors, as befitted those who had withstood a Roman siege for three years nearly 2,000 years ago (70–73 A.D.). Various dignitaries, including Menachem Begin, who later became prime minister and signed the Camp David accords, attended. Yigael Yadin, Israel’s most illustrious archaeologist and the excavator of Masada, read from the final speech of Eleazar Ben Yair, commander of the Jewish defenders, as recorded by the first-century A.D. Jewish historian Flavius Josephus.

Such pomp would be all well and good were it not for one problem: Most of the skeletons buried in this ceremony were probably those of Roman soldiers and civilians, not of the Jewish defenders.

Unfortunately, the mistake in identity was not only the result of scholarly error; the story has all the earmarks of a deliberate attempt to avoid facing the evidence at hand.