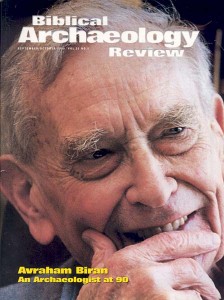 On October 23, 1999, Avraham Biran, director of the Nelson Glueck School of Biblical Archaeology at Hebrew Union College in Jerusalem, will celebrate his 90th birthday. He will also have completed his 34th season at Tel Dan, the longest-running archaeological excavation in Israel.

He has led an extraordinary life—as a student, a government official, a diplomat, a dedicated Zionist and, not least, a Bible scholar and archaeologist. His life has stretched over most of the history of modern archaeology in the Holy Land, and he has known and worked with the leading men and women who participated in that history.

The presidency of the Israel Exploration Society is a largely honorary position. For many years it was held by Benjamin Mazar, the doyen of Biblical archaeologists. Since Mazar’s death in 1995, the position had remained vacant—until this year, when Avraham Biran was named to the post. May he serve for many years to come.

The following interview by BAR editor Hershel Shanks was conducted in Biran’s Jerusalem office on April 13 and 14, 1999.