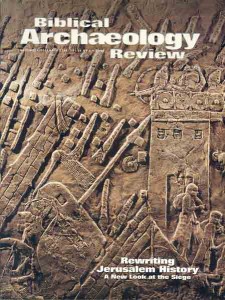 Everything You Ever Knew About Jerusalem Is Wrong (Well, Almost)

I Climbed Warren’s Shaft (But Joab Never Did)

031 Dangling on a rope ladder in a subterranean shaft, 30 feet below the City of David, the oldest part of Jerusalem, and 45 feet above the bottom of the shaft, I wondered whether I was being foolhardy. At 69, should I really be trying to re-enact the... END_OF_DOCUMENT_TOKEN_TO_BE_REPLACED

036 Now that so much attention is being focused on the new excavations around the Gihon Spring and Hezekiah’s Tunnel—which was built as a defense against a siege by the Assyrian leader Sennacherib—it may be time to look at the siege itself. Specifically, was there one attack in... END_OF_DOCUMENT_TOKEN_TO_BE_REPLACED

Come to the Annual (Additional) Meeting

018 018 For several years, we at the Biblical Archaeology Society (BAS) have been organizing sessions at the Annual Meeting of the Society of Biblical Literature (SBL). Our sessions have been exceptionally well attended and exceptionally well received. Criticism has been nil. In this endeavor, I... END_OF_DOCUMENT_TOKEN_TO_BE_REPLACED

What’s For Dinner? The Answer Is In the Pot

046 Pottery talks. That’s a little secret archaeologists know but few outsiders are privy to. And pottery can talk—a lot. If you were to excavate George Washington’s dining room at Mount Vernon and recover fragments of the many plates and cups and bowls and serving dishes used there,... END_OF_DOCUMENT_TOKEN_TO_BE_REPLACED

First Person: Biting the Hand That Feeds You