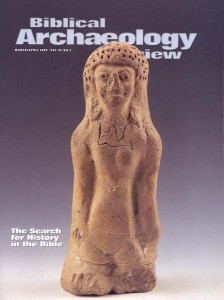 In the shadow of Mt. Gilboa in the northern Jordan Valley stands one of Israel’s largest, most important archaeological sites—and, until recently, one of the least known. Yet there is nothing hidden or obscure about the site. Indeed, Tel Rehov is hard to miss. The mound stands out prominently just 1,500 feet east of Israel’s Highway 90, the main route between Jerusalem and the Sea of Galilee. Rising above the fields of a local kibbutz, Rehov is seen each year by tens of thousands of passing motorists. But it is rarely visited, even by archaeologists.

The reason for this benign neglect is simple: The site is not mentioned in the Bible. Several other places named Rehov do appear in the Bible, but they are not in the northern Jordan Valley. For example, two places named Rehov are mentioned in the territory allotted to the tribe of Asher (Joshua 19:28, 30), but our Tel Rehov is far east of the coastal territory of Asher. Similarly with an Aramean town and state in Syria, mentioned mainly in relation to David’s conquests (2 Samuel 10:6, 8). So, for the better part of a century, when early Biblical archaeologists were digging more famous sites, Rehov was ignored. It simply slumbered like a perfect time capsule, enigmatic and untouched—except when used as a camp site, a lovers’ lane or, in more recent years, a launching pad for hang gliders.