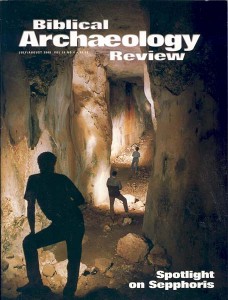 I first learned of Sepphoris’s ancient water system in 1975 from a local resident named Buki. He told me about a huge underground cavern three stories high and stretching more than two football fields long. It sounded to me a little like a flight of fancy. “When I see it, I’ll believe it,” I said. So Buki led me down a steep slope into the middle of an enormous hall 30 feet high, 625 feet long, 10 feet wide and capable of holding more than a million gallons (160,000 cubic feet = 4,300 cubic meters)—enough to supply water to 15,000 people for 2 weeks.1

When Buki told me that no one had ever fully investigated the reservoir, I took his words as a challenge. At the time, I was on the staff of the Israel Defense Forces’ Department of Israeli Studies, which was devoted to teaching soldiers about the land and history of our country. For the next 10 years, I surveyed the region east of Sepphoris. By 1985, I had mapped the 8.5-mile system of tunnels, channels and aqueducts that brought fresh water to the city from the first to seventh century C.E.

Bringing water to a city on a hill like Sepphoris, which rises 250 feet above the surrounding valley, is no easy task. That is why the earliest residents of the town simply relied on rainwater collected in cisterns. But by the first century C.E., this water supply proved insufficient for the growing city.