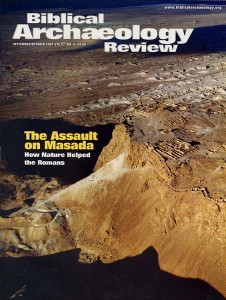 One cold day in November 1990 the Israel Antiquities Authority (IAA) in Jerusalem received what seemed to be a routine call. A construction crew working in the Jerusalem Peace Forest had uncovered an ancient burial cave. To the IAA this came as no great surprise, as that area, directly south of the Old City, had served as a huge necropolis in the late Second Temple period (30 B.C.E.–70 C.E.). Nevertheless, the IAA promptly sent archaeologist Zvi Greenhut to check out the report.

Looking down through the collapsed ceiling of the cave, Greenhut noticed four limestone ossuaries, or bone boxes, scattered about in the cave’s central chamber (photo below). He knew immediately that the cave was a Jewish burial site because the custom of secondary burial, for which ossuaries were used, arose in Jerusalem only among Jews and only during the century preceding the destruction of the Second Temple by the Romans in 70 C.E., as described in later literary sources.