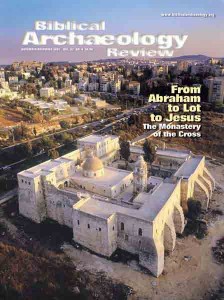 022 023 Three of the five cities of the famous Philistine Pentapolis have long been known—Ashkelon, Ashdod and Gaza. A fourth, Ekron, has recently been confirmed by an inscription, locating it at modern Tel Miqne. Gath, the fifth, remains somewhat of a mystery. We believe we... END_OF_DOCUMENT_TOKEN_TO_BE_REPLACED

The Monastery of the Cross: Where Heaven and Earth Meet

032 Many years ago, before I had married and gone to work as an archaeologist at the Israel Antiquities Authority, I lived for five years in the Monastery of the Cross as a Greek Orthodox monk. So I know the complex well. According to legend, the tree that... END_OF_DOCUMENT_TOKEN_TO_BE_REPLACED

The Rise and Fall of the Dead Sea

042 Genesis 14, one of the most puzzling episodes in the Bible, tells of a strange and unlikely war: Five petty kings, including the kings of Sodom and Gomorrah, rebel against an overlord king, Chedorlaomer, and his three allies. The battlefield is described both as... END_OF_DOCUMENT_TOKEN_TO_BE_REPLACED

Is It or Isn’t It—A Synagogue?

Archaeologists disagree over buildings at Jericho and Migdal

051 Israeli archaeologist Ehud Netzer claims he has found the oldest synagogue building in the Biblical Land of Israel, near Jericho. Not everyone agrees that it’s a synagogue, however. Meanwhile, Italian excavators Virgilio Corbo and Stanislao Loffreda say they have found a synagogue about as old near the... END_OF_DOCUMENT_TOKEN_TO_BE_REPLACED