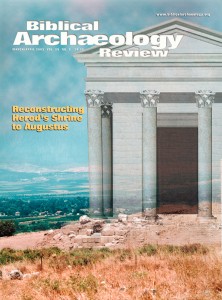 In an interview in our November/December 2002 issue (“A ‘Centrist’ at the Center of Controversy,” BAR 28:06), Israel Finkelstein, head of Tel Aviv University’s Institute of Archaeology and co-director of the excavation at Megiddo, argued for his highly controversial “low chronology.” According to Finkelstein, the dating of early Israelite archaeological materials, especially pottery, should be lowered by a century from their traditional and widely accepted chronology. The result is that the archaeological strata, including monumental architecture, attributed to King Solomon and the United Monarchy in the tenth century B.C.E. is now dated to the ninth century B.C.E., and the poor materials from the 11th century B.C.E. (the period of the Judges, in Biblical terms) become the only evidence for the United Monarchy of the tenth century B.C.E.

The interviewer asked Finkelstein why so many leading archaeologists, including Hebrew University archaeologist Amihai Mazar, rejected his position. The following exchange ensued:

Interviewer: At one point I remember your saying that Ami Mazar was halfway to your position. Do you still maintain that?

Finkelstein: Well, you have to ask him. I think so… The way I understand his position is, first of all, he understands that there’s a real problem with the conventional chronology. Secondly, I think he would admit that some of my arguments are strong and should be addressed.

So we asked Ami Mazar to speak for himself. His response follows.—Ed.