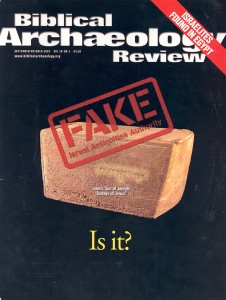 Israeli antiquities collector Oden Golan is the target of an intensive investigation by the Israel Antiquities Authority (IAA) regarding a series of high-end artifacts that are suspected of being forgeries. Golan has been intimately connected with at least five or six extremely important, but now questionable, antiquities.

Golan is best known as the owner of the bone box, or ossuary, inscribed “James, son of Joseph, brother of Jesus” that has now been condemned as a modern forgery by the unanimous decision of a 15-member IAA committee.

The so-called Jehoash inscription, which purports to record repairs to the Temple by the ninth-century B.C.E. Judahite king Jehoash, as described in 2 Kings 12 and 2 Chronicles 24, has also been condemned as a modern forgery not only by the IAA committee, but by leading paleographers and linguists, as previously reported in BAR.a The Jehoash inscription was found by the police in the possession of Oded Golan. Although he denies that he is the owner of the 15-line, 9-by-11-inch black plaque, the police found his statements to be evasive and incomplete.