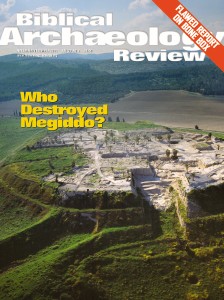 The Philistines settled on the coastal plain of what is now Israel around 1200 B.C.E. and established the famous five cities of their pentapolis—Ashdod, Ashkelon, Ekron, Gath and Gaza. Ashdod, Ashkelon and Gaza all retained their names into modern times, so there is no question as to their ancient location. Current excavations at a site known as Tell es-Safi strongly suggest that it may have been Gath.a We conjectured that Ekron had been located at a site called Tel Miqne, where we excavated for 14 seasons between 1981 and 1996. Our conjecture became historical fact in 1996, when we uncovered at Tel Miqne a royal dedicatory inscription mentioning Ekron.b

In the 200-year period from about 1200 B.C.E. to 1000 B.C.E. (Iron Age I, in archaeological terms), the Philistines reached the peak of their 048political and military power, and also of their material prosperity. But toward the end of this period, the uniqueness of Philistine material culture began to wane. It became diluted and somewhat debased by elements of material culture from Egypt to the south and from Phoenicia to the north.

I want to explore here one small example of the intrusion of Egyptian material culture into the distinctive Aegean traditions that the Philistines brought with them when they migrated from the west.

The end of Iron Age I at Ekron is a well-defined period, because at the very end of it, the city was destroyed. But by whom? There are two major candidates: the Israelites, newly united under King David, or that behemoth to the south, Egypt. We simply don’t have enough evidence to decide who it was. But we can say, as I shall now demonstrate, that Egyptian cultural influence had already permeated Ekron in Iron Age I.

The small finds on which I will focus were discovered in a building in Ekron that appears to have been a Philistine temple. This structure (designated Building 350) is similar to a Philistine temple excavated some years ago by Amihai Mazar at Tell Qasile, a site in what is now the middle of urban Tel Aviv;c our finds from Building 350 are also similar in character to those unearthed by Mazar. At Building 350, a large assemblage of pottery, much of which is decorated with Philistine motifs, also reflects the structure’s cultic nature. The pottery was discovered in one of the temple’s cultic rooms. In addition to the pottery, we found a red-slipped ceramic pomegranate and a unique kernos ring (a ritual vessel) with a he-goat and she-goat facing each other. The ring of the kernos is hollow; presumably it contained some liquid—water or wine—that may have been poured as a libation in some lost religious ritual. Other finds included a painted limestone baboon statuette and a delicately executed ivory human head.

Building 350 was entered from the side via a spacious courtyard. In this courtyard was a large, well-constructed round hearth, made of pebbles and covered by a heavy ash layer that included charcoal and bones. (Hearths are an important architectural installation in the Aegean region and in Cyprus, but they are rare in Canaan.) Two stone pillar bases in this room probably held wooden pillars that supported the roof of the courtyard.

From the temple courtyard three smaller rooms could be reached. A room on the north side was entered over a mudbrick threshold cobbled with wadi pebbles. This room also had an entrance from the outside. The room at the opposite end of the building was empty. For us, the most interesting room was the middle one. It contained a plastered, mudbrick bamah (cultic platform) preserved to a height of more than three feet. Near the bottom of the bamah was a bench that ran around its base.

Here we found three small objects that initially puzzled us. All three are small discs, with a groove on the side. They are convex on the top and flat on the bottom. Two are made of ivory and are similar in form; 049they may have been a pair, even though they were found in successive strata. Both are plain. The third is made of faience (ceramic coated with a glossy glaze) and displays a rosette, executed in pierced openwork and surrounded by two concentric circles. A leaf-like vein design is incised on the petals of the flower. There are traces of a blue glaze on this disc.

A little research disclosed that similar objects had been found at Egyptian sites and were sometimes described as bobbins or spindles. Some people said our faience exemplar could have been a spool.

But more research revealed that they were none of these—all three are decorative ear plugs!

The ear plugs were worn in large holes in the earlobe, a custom that apparently was imported from Egypt. Beginning in the time of Amenhotep III (early 14th century B.C.E.), women are shown in three-dimensional sculpture, as well as in carved reliefs and paintings, wearing large ear ornaments that are most likely ear plugs. The earliest example of an ear plug probably comes from the reign of Amenhotep IV, known more familiarly as the heretic pharaoh Akhenaten (also 14th century B.C.E.).

Female mummies have been excavated at Deir el-Bahri in Egypt with holes of enormous proportions in their earlobes. In the XXIst Egyptian Dynasty (11th-10th century B.C.E.), women of the ruling house were wearing ear plugs of such size that their earlobes were distended to mere stringy loops of flesh, as their mummies reveal.

We find an ethnographic parallel in Kenya and Tanzania, where ear plugs of wood or ivory are still in use. The hole to accommodate these ornaments begins small and is gradually increased by the use of larger and larger plugs. Sometimes, when the tribespeople in this region are not wearing plugs, they loop their distended earlobes over the top of their ears. I once referred to such ear plugs as “barbaric jewels,” but then I saw young people in Israel and America wearing navel rings and lip rings, even metal tongue studs.

Numerous ivory, alabaster and faience Egyptian ear plugs, found at sites such as Abydos and Thebes, provide parallels for the ivory ear plugs from Ekron. One ear plug similar to our faience example is in the collection of the Royal Scottish Museum in Edinburgh.1 This one and ours both have pierced openwork, with the center decorated as a rosette, ringed by concentric circles. In the Edinburgh plug, the concentric circles are embellished with rows of raised dots and ribs. Alternatively, in the Ekron example, the rosette motif covers almost the entire surface of the dome and its petals bear a decoration of leaf-like incisions. There is no additional decoration in the band encircling it. A faience ear plug in the Fitzwilliam Museum in Cambridge, England, also has a rosette at the center, executed in pierced openwork—just like ours.

Ear plugs may have developed from an earlier Egyptian accessory, the ear stud, although a recent excavation at Kerma in Sudan uncovered a black stone ear plug from the Hyksos period (17th-16th centuries B.C.E.). This suggests that the practice may have originated south of Egypt. Whatever their origins, our Egyptian ear plugs demonstrate to what extent Egyptian culture was penetrating the Philistine cities by the 11th century B.C.E.

At the peak of their cultural distinctiveness, the Philistines were already incorporating Egyptian (and Phoenician) elements into their culture. Then, at the end of the 11th or beginning of the 10th century B.C.E., the city was destroyed—either by King David or by the Egyptians. Which one is likely to remain unknown.

The author thanks Tami Nachmias-Lotan for her assistance in preparing this article. For more details, see Trude Dothan, “An Early Phoenician Cache from Ekron,” in Jodi Magness and Seymour Gitin, eds., Hesed ve-Emet: Studies in Honor of Ernest S. Frerichs (Atlanta: Scholars Press, 1998).

Trude Dothan  (d. 2016) received the coveted Israel Prize for archaeology in 1998, in recognition for her many years of excavating (at Deir el-Balah, Hazor and Qasile) and teaching (at Hebrew University, Princeton, New York University, Brown University and the University of California at Berkeley). One of the world’s leading authorities on the Philistines, Dothan is the author of The Philistines and Their Material Culture (Israel Exploration Society, 1982) and, with her husband, Moshe, of People of the Sea (Macmillan, 1992).