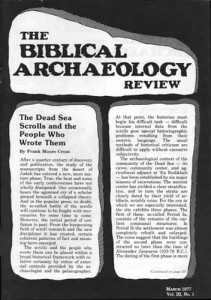 The Bible Comes to Life could well be the secondary title for The Book and the Spade, an exhibit on archaeology and the Bible which can be seen currently through December 1977 (Sunday through Thursday afternoons) at the Jewish Museum in New York City. Models, maps, charts, and photographs supplement over one hundred ancient objects to carry the viewer through the sweep of more than 2000 years of Biblical history.

After seeing a 15-minute audio-visual introduction and explanatory models of excavations, the visitor follows Abraham through Mesopotamia, and Moses and the Hebrews in Egypt. At the next stop, I saw a young visitor patting the wall of a reconstruction of an Israelite house (with its stone floor, mud brick walls, and roof of branches); he remarked in wonder, The people who lived here were just like us!

The exhibit continues with carefully chosen objects illustrating the development and division of the Monarchy, quotations from the Prophets and depictions of invasion and conquest by Assyria, Babalonia, Persia, Greece, and Rome; it is clear why artifacts from these areas as well as from Egypt and Israel itself are needed to tell the Biblical story.