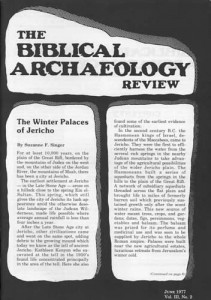 “Jerusalem’s ‘Roman Cardo’ Isn’t Roman After All”, headlined a March issue of the Jerusalem Post. From there, the story spread to other media, correcting earlier erroneous reports that Prof. Nachman Avigad had found part of the Roman Cardo in his excavations in the Jewish Quarter of the Old City of Jerusalem.

According to Prof. Avigad, the part of the Cardo he found should be dated to the Byzantine period, rather than to the Roman period.

In making the correction, the Jerusalem Post article stated that the part of the Cardo Avigad found had earlier been “presumed by all—including other archaeologists who had visited the site—to be a remnant of Aelia Capitolina, the city built by Romans on the ruins of Jerusalem.”

But not by The Biblical Archaeology Review! The story reporting the find (“The Ancient Cardo Is Discovered In Jerusalem,” BAR 02:04) stated:

“The parts of the Cardo thus far discovered appear to have been laid in Byzantine times, rather than by the Romans. This is contrary to several reports in the popular press which identified the roadway as Roman. The pavement was laid on bedrock and the pottery associated with it is Byzantine. At one point a fill was discovered beneath the pavement which contained tiles of the second and third centuries A.D. Naturally, the pavement must be dated no earlier than the latest of this material.”