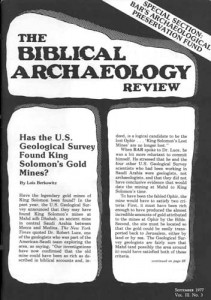 There is not one scrap of evidence, Biblical or archeological, in favor of Yadin’s theory.

The Biblical passage Yadin relies on speaks of a bama in Jerusalem and says that Josiah “broke down the high places of the gates” (2 Kings 23:8). The verse indicates that Josiah destroyed the buildings as well as the altars. But building 430 [the building at Beer-Sheva to the left of the city gate as one enters] was not destroyed until the entire city was burned by an enemy. Meanwhile, the altar had already been dismantled.

During the last season of excavation some additional stones of the altar were found outside the gate, buried in the newly laid rampart of stratum II. [Stratum II was the great Israelite city of the Divided Monarchy]. House 430 was built during the period of stratum II. The house was built after the altar was dismantled.

The gate in the Biblical passage is named after “Joshua the governor of the city,” a practice that makes sense for a city with more than one gate; but Beer-sheva had only one gate!

However, the grossest chutzpa of Yadin’s theory is his blatant emendation of the Biblical passage to make it refer to Beer-sheva and not to Jerusalem as it clearly does.