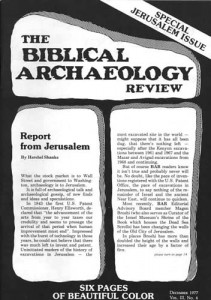 What the stock market is to Wall Street and government to Washington, archaeology is to Jerusalem.

In 1843 the first U.S. Patent Commissioner, Henry Ellsworth, declared that “the advancement of the arts from year to year taxes our credulity and seems to presage the arrival of that period when human improvement must end”. Impressed with the burst of technology in those years, he could not believe that there was much left to invent and patent. Uninitiated readers of the history of excavations in Jerusalem—the most excavated site in the world—might suppose that it has all been dug, that there’s nothing left—especially after the Kenyon excavations between 1961 and 1967 and the Mazar and Avigad excavations from 1968 and continuing.

But of course BAR readers know it isn’t true and probably never will be. No doubt, like the pace of inventions registered with the U.S. Patent Office, the pace of excavations in Jerusalem, to say nothing of the remainder of Israel and the ancient Near East, will continue to quicken.

Most recently, BAR Editorial Advisory Board member Magen Broshi (who also serves as Curator of the Israel Museum’s Shrine of the Book which houses the Dead Sea Scrolls) has been changing the walls of the Old City of Jerusalem.

In places Broshi has more than doubled the height of the walls and increased their age by a factor of five.