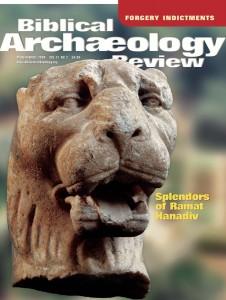 Four Israelis and one Palestinian Arab were indicted in late December 2004 in Jerusalem on charges of running a massive forgery ring over several decades. The Israel Antiquities Authority (IAA) and the Israeli police claim the ring has created a host of Biblically-related fakes involving millions of dollars, some of which are exhibited in the prestigious Israel Museum.

Many of the alleged forgeries have also been featured in this magazine, including the James ossuary inscription, reading “James, son of Joseph, brother of Jesus,” and the inscribed ivory pomegranate reading “Holy to the priests, the Temple of [Yahwe]h.” The ivory pomegranate, once thought to be the only relic from Solomon’s Temple, was purchased by the Israel Museum in 1988 for $550,000.

Both Golan and Deutsch have responded with vociferous denials of all the accusations. Deutsch has threatened to sue the IAA for $20 million for damage to his reputation.