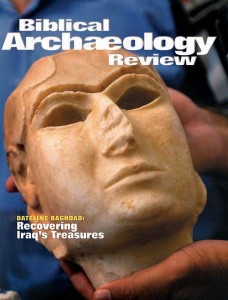 020 To encounter ancient Near Eastern religion, one can hardly do better than to begin with the clay model house shrines that appear as early as the third millennium B.C. and continue through the Biblical period. An especially instructive one is said to have come from northern Palestine,... END_OF_DOCUMENT_TOKEN_TO_BE_REPLACED

Firsthand Report: Tracking Down the Looted Treasures of Iraq

026 026 The world watched in horror as the images were flashed all over the globe: In the chaos that surrounded the fall of Baghdad in April 2003, the Iraq Museum—home to a priceless collection of ancient objects from the birthplace of civilization—was being wildly looted... END_OF_DOCUMENT_TOKEN_TO_BE_REPLACED

040 041 The Philistines were the chief adversary of Biblical Israel in the 12th and 11th centuries B.C.E. They were also the conquerors of the Canaanite cities of the southern coastal plain.1 At the beginning of the first millennium B.C.E., however, the Philistine cities were destroyed... END_OF_DOCUMENT_TOKEN_TO_BE_REPLACED

How the God of Israel Became a God for All

057 Israel not only survived but thrived in exile. Indeed, Israelite Yahwisma became universal monotheism in the Babylonian Exile. In the preceding article, Professor Seymour Gitin explains why the Philistines, unlike the Israelites, did not survive the Babylonian Exile, although their cities were destroyed by the same Babylonian... END_OF_DOCUMENT_TOKEN_TO_BE_REPLACED

Strata: Giving the Philistines Their Due

Strata: The Palace of King David?