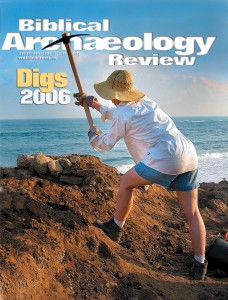 A dig can start in the most casual of ways. Our partnership, for example, was hatched during a chance meeting in the summer of 2004. The encounter lasted less than a minute:

Assaf: “Hi, Eric! Good to see you again. Want to reopen the excavations at Kabri with me?”

There was, however, a bit more to the story. For several years, Assaf had been trying to raise the funds to re-excavate Kabri. The site, on the grounds of Kibbutz Kabri about 4 miles east of the Mediterranean Sea, had been excavated from 1988 to 1993 by Aharon Kempinski, a professor at Tel Aviv University, and Wolf-Dietrich Niemeier, then a professor at Heidelberg University. They uncovered a monumental Middle Bronze Age IIB Canaanite palace probably dating to the 17th century B.C.E. (see sidebar).