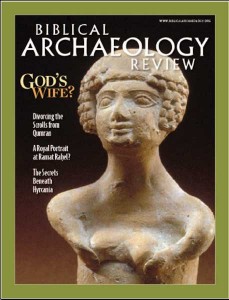 In the 12th century B.C.E., when the Philistines arrived by land and by sea on what is now the southern coastal plain of Israel, they destroyed Ekron, the Canaanite settlement at Tel Miqne. Then they proceeded to establish at Tel Miqne/Ekron their own city, one of the five cities of the Philistine Pentapolis, as described in the Bible.

For 14 extensive seasons, Trude Dothan of the Hebrew University and Seymour Gitin of the Albright School for Archaeological Research in Jerusalem have led excavations at Tel Miqne. They have exposed enough of the first Philistine city at the site to conclude convincingly that it was both large (50 acres) and wealthy. Moreover, it was surrounded, they tell us, by massive fortifications. In this, however, I believe they are mistaken; this great Philistine urban center was unfortified in this period.

To explain how the excavators made this egregious mistake will take us into the trenches, looking at the details as an archaeologist would. Not surprisingly, some of these details are difficult to understand. And archaeologists not infrequently disagree with one another. In this case, however, I think the matter is clear: Philistine Ekron of the 12th century B.C.E., covering both the upper mound (or acropolis) and a very large lower mound, was unfortified.