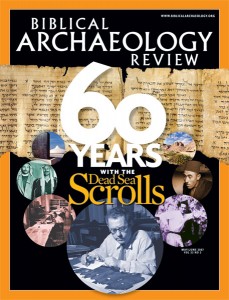 In early 1947 (or late 1946) an Arab shepherd searching for a lost sheep threw a rock into a cave in the limestone cliffs on the northwestern shore of the Dead Sea. Instead of a bleating sheep, he heard the sound of breaking pottery. When he investigated, he found seven nearly intact ancient documents that became known as the Dead Sea Scrolls.

Three of the scrolls, including the Book of Isaiah, were acquired in Bethlehem by Eleazar L. Sukenik of The Hebrew University just as the United Nations voted by a two-thirds vote to partition Palestine, thus creating a Jewish state for the first time in 2,000 years. (See Past Perfect in this issue for Sukenik’s moving account.)

The other four scrolls were acquired by the Metropolitan Samuel, the Jerusalem leader of a Syrian sect of Christians. When he was unable to sell them in Jerusalem, he took them to the United States, where they were displayed in the Library of Congress. Still unable to sell them, he placed a classified ad in The Wall Street Journal offering them for sale. Through fronts, they were purchased for Israel by war hero and archaeologist Yigael Yadin, Sukenik’s son.

A special museum, The Shrine of the Book, was built in Jerusalem to house the scrolls.