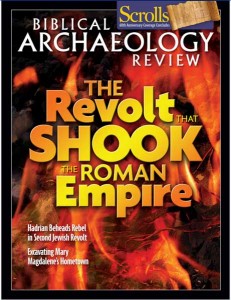 The famous Ivory Pomegranate Inscription: Is it a forgery or authentic? You decide. And let us know your decision.

A Hebrew inscription is engraved around the shoulder of the thumb-size pomegranate that reads, “Holy to the priests, (belonging) to the Temple of [Yahwe]h.”

For decades the tiny object occupied a special place in Jerusalem’s prestigious Israel Museum—the only surviving relic from Solomon’s Temple.

The pomegranate was first seen in 1979 in a Jerusalem antiquities shop by one of the world’s leading Semitic epigraphers, André Lemaire of the Sorbonne. Based on a lifetime of experience and a careful examination, he pronounced the inscription authentic. It was also examined by Professor Nahman Avigad of The Hebrew University, then Israel’s most respected epigrapher, who wrote that “I am fully convinced of ... the authenticity of its inscription ... [T]he epigraphic evidence alone, in my opinion, is absolutely convincing.”

With these assurances, in 1989 the Israel Museum acquired the pomegranate for $550,000. All Israel was excited. On the day the pomegranate went on display in a special room of the museum with a narrow light beaming on it from the ceiling, the exhibit was the first item on the evening news in Israel.

In 2004, after two widely publicized inscriptions had been declared forgeries by the Israel Antiquities Authority, the museum decided to revisit the question of the authenticity of the Pomegranate Inscription. A special committee was appointed to reexamine the inscription, using the latest scientific technologies. The committee concluded that the inscription was a forgery!