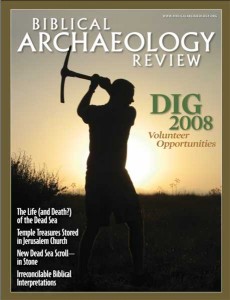 IF it were written on leather (and smaller) I would say it was another Dead Sea Scroll fragment—but it isn’t. It is written on gray-colored stone! And it is 3 feet high and 1 foot wide!

Otherwise, it strongly resembles in many respects what we have come to expect from fragmentary Dead Sea Scrolls. It is clearly dated by the shape and form of the letters (paleography) to sometime between the late first century B.C.E. and early first century C.E.—around the turn of the era, the same period as the scrolls. This dating is confirmed by the Hebrew of the text (post-Biblical and pre-Mishnaic).

One would expect that an inscription on stone would be engraved, as are the inscriptions on stone ossuaries (bone boxes) like the now-famous ossuary inscribed “James son of Joseph brother of Jesus.”a But this text is not engraved. It is written in ink, just like the Dead Sea Scrolls.

Moreover, the text is inscribed in two columns (like a scroll)—one of 44 lines, the other of 43 lines, for a total of 87 lines of script. Horizontal guidelines that cross the column divide were incised with a thin, sharp instrument, very similar to the guidelines in the Dead Sea Scrolls. The Hebrew letters are suspended from the upper guideline, just like the scrolls. Vertical guidelines mark the beginning and end of each of the two columns, again like ... (You complete it.)

Where did this stone come from? I wish we knew. Chances are it came from Jordan. It simply appeared on the antiquities market, however, and was acquired by Zurich collector David Jeselsohn, who has kindly permitted me to publish it. At one point, it apparently broke in three pieces, which still have not yet been glued together.

Alas, the text bears another resemblance to the famous Dead Sea Scrolls. It is very badly preserved, with lacunae all over.

And the letters that have survived are often very hard to read. The back of the stone is rough and unfinished, unlike the polished side with script. This suggests that the stone was once mounted in a wall. Whether it was inscribed with the stone already mounted in the wall or lying flat on the floor, it must have been very inconvenient to write on the polished side and this may well account for the rather careless look of the script, which was nevertheless the work of a professional scribe.

The text has not been identified, but it is clearly a literary composition, similar to Biblical prophecies. It is written in the first person, perhaps by someone named Gabriel (“I Gabriel,” line 77), so I have named the text “Gabriel’s Vision.” It is apparently a collection of short prophecies addressed to someone in the second person.

Like the prophets of old, whoever wrote this composition proclaims the “word of Yahweh,” the personal name of the Hebrew God. And, again like the Bible, many of the prophecies open with the words “Thus (or therefore) said the Lord [that is, Yahweh and sometimes the more generic Elohim] of Hosts.” Sometimes the text uses Elohei Yisrael, “God of Israel.” There are also numerous references to Yahweh’s kavod, or glory, familiar to all students of the Hebrew Bible.

The text also mentions “My servant David.” Elsewhere it refers to “David the servant of Yahweh.” Jerusalem is also mentioned several times. Apparently the composer of this texts supports the Davidic dynasty.

The text as a whole is not known from any other Jewish source.

In addition to the name Gabriel, the composition refers to the “messenger (or angel) Michael,” who is mentioned in Daniel 10:13, in the New Testament (Revelation 12:7 and Jude 9) and in extra-Biblical sources like Enoch and the Dead Sea Scroll known as the War Scroll (1QM). In these extra-Biblical sources Michael is frequently mentioned together with Gabriel. It is difficult to be more specific, but it does suggest that the text as a whole is apocalyptic (referring to the end of days), as these are clearly apocalyptic figures. We may conjecture that a rivalry between two messianic groups is involved. There seems to be no doubt that the composer of this text belongs to the group supporting the Davidic messiah.

It is difficult to say more. Perhaps this intriguing text only emphasizes the variety of Jewish movements at the turn of the era—and how much about them we don’t yet know.

The author asked us to note that she studied this inscription in consultation with Binyamin Elizur.—Ed.