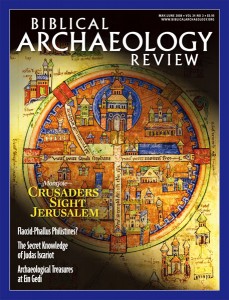 On Tuesday morning, June 7, 1099, the knights of the First Crusade caught their first glimpse of Jerusalem—from a height near the campsite where they had spent the night. The Crusaders called the hill Mons Gaudii—Mount Joy, or Montjoie in Norman French. The Holy City had finally come into view only after a long, grueling and bloody three-year military campaign.

It was from here that pilgrims for centuries thereafter would dismount, display their crosses and walk to Jerusalem.

A 12th-century pilgrim named Theodoric describes the scene at Nebi Samwil, just a few miles from the Holy City:

[There] stands a small church where the pilgrims have their first view of this city and, moved with 038great joy, display their crosses. They take off their shoes, humbly trying to seek the person who for them was pleased to come to this place as a poor and humble man.1

Another pilgrim, the Russian abbot Daniel, describes the emotion: