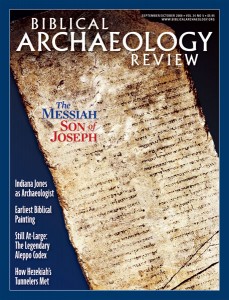 A new inscription, recently published in BAR for the first time in English,a may hold the key to unlocking a new understanding of some of the history of Christian and Jewish messianism.

Written on a stone 3 feet tall, the new text has many of the characteristics of a fragmentary Dead Sea Scroll, including being poorly preserved. Based on the stance and form of the letters, the distinguished decipherers of the inscription (Ada Yardeni and Binyamin Elizur) date it to the late first century B.C.E. or early first century C.E.

Yardeni describes the text as “a literary composition similar to Biblical prophecies.” From a word or a phrase here and there, she notes that the text is apocalyptic in character and comes from a group that believes in a Davidic Messiah. She calls the text “Gabriel’s Revelation,” or Hazon Gabriel in Hebrew.

The Dead Sea Scrolls have, in general, revealed that many of the same religious concepts and beliefs found in Christianity are also found in the scrolls, often appearing first in the scrolls and thereafter surfacing in early Christianity. I believe this is also true of the messianism of “Gabriel’s Revelation.”