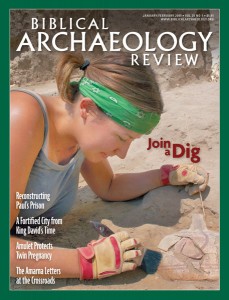 Yossi Garfinkel has gone Biblical. After years of laboring in the pleasant orchards of prehistory, Yossi decided he needed a new and different site. The voluptuous (not to say zaftig) middle-aged goddesses of Sha’ar ha-Golan (a site about a mile south of the Sea of Galilee in the Jordan Valley) had long since lost their appeal to him. Now, in his maturity, Yossi felt he was ready for the bitter controversies and intense debates that pervade Biblical archaeology. So he chose a site on a hilltop overlooking the Elah Valley, where David met Goliath in mortal combat, according to 1 Samuel 17.

More formally known as Professor Yosef Garfinkel of the Hebrew University, Yossi first garnered the necessary support that any archaeological excavation requires. Then he enlisted as codirector Saar Ganor, a Hebrew University graduate student who works for the Israel Antiquities Authority and who first led Yossi to the site. Finally, at least figuratively, Yossi bought himself a new shovel. That was all he needed to go into the field (other

than a few volunteers to do the real work).

In their first season—the summer of 2008—the new excavation of Khirbet Qeiyafa (“the Ruins of Qeiyafa,” pronounced Ke-YAW-fa) was unusually successful. The team found what Garfinkel calls “a city.” When the archaeologists examined the ubiquitous pottery sherds, they found that they all dated to the same period—what archaeologists call Iron Age IIa. Qeiyafa was a one-period site. There was nothing earlier and nothing later, except for some much later Hellenistic remains. This is confirmed by the stratigraphy of the site. Qeiyafa was not the usual tell, one occupation level above the other.

In Biblical archaeology, Iron Age IIa is a critical period. It marks the border between Iron Age I (the pre-monarchic period) and Iron Age II (the period of the Israelite monarchy). If David and Solomon lived, they lived in Iron Age IIa.

According to the time-honored or traditional Biblical chronology, Iron Age IIa began in about 1000 B.C.E. But the traditional chronology has been questioned lately by a new generation of archaeologists, centered in Tel Aviv University and led by Israel Finkelstein, who contend that Iron Age IIa in archaeological terms did not begin until later, perhaps as late as 900 B.C.E. According to this so-called “low chronology,” the sites once thought to be Solomonic were in fact much later. The archaeological finds from the period when David and Solomon really lived, according to these theorists, reflected little, if any, indication of a centrally organized society. This did not develop until the ninth century B.C.E., under kings like Omri and Ahab. Israel at the time of David and Solomon, they argued, was at most a bunch of tribes led by a local tribal chief; hence, it was not a nation so much as a chiefdom.

If the city at Qeiyafa existed as early as 1000 B.C.E., it would seem to upset this theory, however. The pottery found at the site clearly dated to Iron Age IIa, but did this archaeological period begin in 1000 B.C.E., as the traditional chronology would have it, or did it begin only generations later?

The pottery alone would not answer this—but ancient olive pits might. Garfinkel collected some from the site and sent them to the Oxford radiocarbon lab to be dated by radiocarbon testing. The answer came back from Oxford: The short-lived olive pits dated to between 1100 and 920 B.C.E. to a probability of 94 percent and between 1050 and 970 B.C.E. to a probability of 50 percent. Since, even by the traditional chronology, Iron Age IIa did not begin until 1000 B.C.E., the city of Qeiyafa was founded no earlier than 1000 B.C.E. and, according to the carbon-14 test, existed no later than 920 B.C.E (when it was violently destroyed).

All archaeologists (about 40 of them) who have looked at the pottery agree that it dates to “the very beginning of the Iron IIa period,” says Garfinkel. Therefore, using the probability of 50 percent in the carbon-14 analysis, Garfinkel dates the settlement of Qeiyafa to 1000–970 B.C.E.

Thus the results of this excavation seem to confirm 041the traditional chronology. Moreover, from about 1000 B.C.E. an organized Israelite state, exemplified by Qeiyafa, was in existence.

Put this together with the extraordinary 1993 find at Tel Dan of an inscription by an enemy of Israel that refers to the “dynasty [literally, ‘house’] of David,” it begins to look as if King David lived and that he ruled a unified nation-state.

If Qeiyafa ceased to exist in 970 B.C.E. (Garfinkel’s latest date for the city), it is too early even for King Solomon’s reign. It must date to the reign of King David.

So what can Qeiyafa tell us about Israel in the time of King David?

The circular Iron Age city wall is composed of two parallel walls periodically divided into casemates—a so-called casemate wall. This fortification wall is more than 2,200 feet (700 m) long and 13 feet (4 m) wide. Some of the megalithic ashlars in this wall weigh almost 5 tons. Altogether, more than 200,000 tons of stone were needed to construct this wall. It would take a complex, highly organized society to build a wall like this.

But there is even greater significance to this wall in light of an argument made by some of the supporters of the low chronology. At contemporaneous sites in Judah (and Judah, rather than the northern kingdom of Israel, is the focus of the “chiefdom” argument), the settlements are unwalled. This, supporters of the low chronology argue, implies that these cultures did not have a society complex enough to fortify their cities with a substantial wall. The city levels contemporaneous with Qeiyafa at Arad (XII), Beer-Sheba (VII), Lachish (V) Batash (IV) and Masos (II) are all unfortified. These settlements had no city wall but were protected only by houses arranged around the site periphery. This is cited by proponents of the low chronology to support their theory that in Iron Age IIa the area of Judah was a simple, unorganized, tribal society.

Qeiyafa upsets this theory—in spades. “The new excavations,” says Garfinkel, “clearly indicate that already in the time of King David, urban cities were constructed in Judah.”

To support Garfinkel, there is in fact much more at Qeiyafa than the city wall just described. Garfinkel’s team also found the city gate. It is a massive four-chambered gate constructed of carefully shaped ashlar stones that, as Garfinkel tells us, “characterized royal buildings in the Iron Age. Khirbet Qeiyafa is clearly a well-planned fortified city, and not a rural settlement.”

It is strategically located on the northern side of the Elah Valley, on the main highway going east from Philistia and the coastal plain to Jerusalem, and from there south to Bethlehem and Hebron. Garfinkel calls Qeiyafa a fortified checkpoint on the road to Jerusalem. It was probably intended 042to defend Judah against the much larger Philistine city of Gath. Qeiyafa is less than 6 acres in area. The hostile Philistine city of Gath, just 6.5 miles away in the Elah Valley, is about 75 acres. In this sense the Biblical story of David and Goliath, even if legendary, may be understood as a kind of Biblical metaphor, the little David of Qeiyafa versus the Philistine giant of Goliath/Gath.

Inside the city, the Qeiyafa archaeologists also excavated two substantial structures near the city gate. Other structures are likely to be uncovered in subsequent seasons.

The question naturally arises as to whether this city overlooking the border between Philistia and Judah was an Israelite city. It is easy to exclude the possibility that it was a Philistine site because the pottery assemblage differs so radically from that found at Philistine sites. And Canaanite culture was nonexistent in this region after the destruction of Lachish nearly 200 years earlier. So Qeiyafa’s identification as a Judahite/Israelite site seems assured.

Another indication that it is a Judahite (or more broadly, Israelite) site comes from the most startling find of the excavation. In one of the two structures that the archaeologists excavated next to the city gate, they found on the floor an ostracon, a broken piece of pottery commonly used in ancient times as a kind of notepaper. This ostracon is quite large as these things go (about 6 x 6 in) and consists of five lines of text divided by black horizontal lines. Each line of the ostracon has about ten letters.

The letters are what scholars call proto-Canaanite, the form of letters in which such ancient Semitic languages as Canaanite, Phoenician and Hebrew were written. Garfinkel believes the language of the inscription is Hebrew. If so, it would be the oldest 043inscription ever discovered. The famous Gezer calendar (c. 900 B.C.E.) and the Mesha stela (c. 850 B.C.E.) are later by a century or more, Garfinkel tells us. (And they are not as securely dated as the Qeiyafa inscription.) The Qeiyafa inscription is the first Hebrew inscription clearly dated to the tenth century. It proves that the Hebrews in the earliest years of the United Monarchy were writing. The Qeiyafa inscription “will now serve as the anchor for the entire development of the early alphabetic scripts,” according to Garfinkel.

So what does the inscription say? The decipherment has been assigned to Haggai Misgav, a Hebrew University epigrapher. “So can we see a high-resolution image of the inscription?” I asked Garfinkel. “Maybe our readers would have some helpful suggestions for Misgav,” I urged. All to no effect. Yossi stuck to the time-honored tradition that a readable picture of the inscription remain a secret until the scientific report is published in a scientific journal by the scholar assigned to publish it: Remember the Dead Sea Scrolls.

“Be a hero! Break the mold,” I urged Yossi. No way, he responded. He did tell us that the first line contains the Hebrew words “don’t do,” and that “king,” “judge” and “slave” also seem to be legible, but “it is still premature to talk about the content,” he maintains.

So when will we see a picture of the inscription with all of its indistinct letters? If the past is any guide, it will be a year or more. Is this any way to run a railroad?

Haggai Misgav has a reputation for being a very competent epigrapher. But he can only be helped, not hurt, by what other scholars (and even amateurs) have to say prior to his official publication. You can be sure, he will show the ostracon and high-resolution pictures (and infrared images as well) to friends and colleagues. He will take some of their suggestions and thank them in his publication of the ostracon. So why not enlarge the circle? It cannot hurt, and it may help. In any event, an early look at the inscription will not detract from his fame as the publisher of the famous ostracon from Qeiyafa.