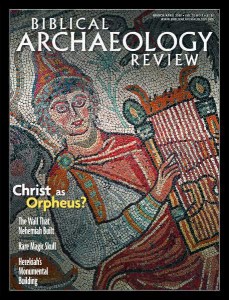 “In September 2004 the directors of the Israel Museum and the Israel Antiquities Authority (IAA) appointed a special committee in order to examine the authenticity of the ivory pomegranate [inscription] from the Israel Museum.” So states the committee’s resulting report, published in 2005.

When this joint committee was appointed, a different committee, appointed by the IAA alone, had already declared the James Ossuary inscription (“James, son of Joseph, brother of Jesus”) a forgery in 2003. This time, however, it would be a committee not only of the IAA but also of the Israel Museum.

It now turns out that the pomegranate committee was not a joint committee at all. The committee members were “determined and led” by the IAA, according to an Israel Museum curator. Michal Dayagi-Mendels, chief curator of archaeology at the museum, states that, although she is listed as a member of the committee, she was there only as an observer.