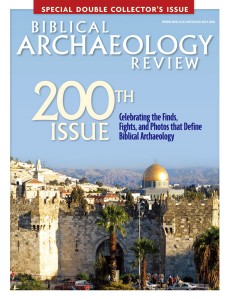 I came to Ketef Hinnom in the early 1970s looking for evidence of these ancients, such as quarries, farms, orchards, military encampments, burials, roads, forts—even cultic activity that took place outside the city.

Ketef Hinnom is located just opposite the Old City—to the southwest, across the Hinnom Valley from Mt. Zion. When I began collecting surface potsherds and looking for terrain features, I found evidence of human activity over thousands of years. In each period, the inhabitants had cleared away the remains and looted the treasures of their predecessors.

In 1975, we began a relatively small excavation that turned out to be extraordinary both in the quantity and 024the richness of the finds: an ancient church, cremation burials of the Tenth Roman Legion, burial caves from the time of the Judahite monarchy, jewelry, weapons and—the pièces de résistance—two inscribed silver amulets that contain the earliest texts ever discovered from the Hebrew Bible.