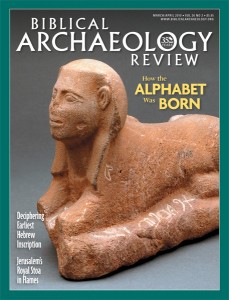 To the Asiatics, as they were called, the lush Nile Delta, with its open marshlands rich with fish and fowl, was a veritable Garden of Eden. From earliest times, Canaanites and other Asiatics would come and settle here. Indeed, this is the background of the Biblical story of the famine in Canaan that led to Jacob’s descent into Egypt (Genesis 46:1–7).

By the beginning of the Egyptian Middle Kingdom (a few years after 2000 B.C.E.), the pressure of immigrants on the eastern Delta was so strong that the Egyptian authorities built a series of forts at strategic points to “repel the Asiatics,” as the story of Sinuhe tells us.1

More than a century later, however, Egyptian policy toward the Asiatics changed. Instead of trying to prevent them from coming in, the Egyptians cultivated close relations with strong Canaanite city-states on the Mediterranean coast and allowed select Asiatic populations to settle in the eastern Delta. The last of the great pharaohs of the XIIth Dynasty, Amenemhet III (c. 1853–1808 B.C.E.) and Amenemhet IV (c. 1808–1799 B.C.E.), even established a new town for them.