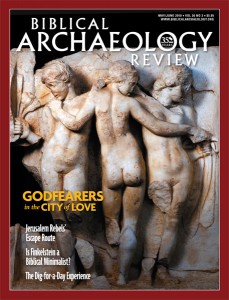 The underground chambers were filled with the sounds of the crunching of small picks against the dirt floors and the thud of earth dumped into buckets. Voices of a dozen children and their parents accompanied warnings not to swing picks at each other and to use the buckets assigned to each room. Discoveries of pottery sherds and bone slivers reminded us that we were doing real archaeological work. Unruly as this particular group was, they were “workers,” helping to expose the remnants of life inside and beneath dwellings from 2,200 years ago.

On this winter morning at Maresha, not far from the Elah Valley where, according to the Bible, David defeated the Philistine giant Goliath, I joined three families and two young couples posted at the American consulate for a day-long excavation experience. All of us were Americans, as are most of the 30,000 to 50,000 people who come to Dig-for-a-Day each year. Bernie Alpert invented the idea more than 26 years ago, not long after moving to Israel from Chicago with his wife, Fran. He turned his passion for volunteering at digs into 062something that people could do even if they had only a few hours to spend. At the same time, they could learn some history and archaeology, experience the land of Israel with their fingers and help support the cost of the excavation. Bernie was soon joined by archaeologist Ian Stern, who, with his wife, Heidi, now runs the parent company, Archaeological Seminars, and directs the dig at Maresha with Bernie’s part-time help.