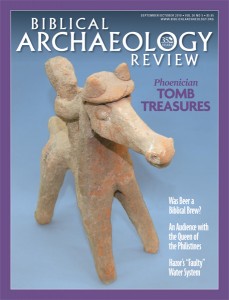 List your favorite Biblical beasts. Surely, you’ll include the serpent of the Garden of Eden, Jonah’s whale/large fish, Behemoth, and Leviathan. Predictably, and often frighteningly, these beings make an appearance in Simcha Jacobovici’s DVD, Beasts of the Bible, along with the crocodile into which Aaron’s rod turns, the Philistine deity Dagon (half human/half fish?), six of the ten plagues, and cherubim. All of this—and more—is packaged in a way that will inform and entertain some viewers, while frustrating and perhaps even infuriating others. Or, as was the case with this reviewer, there was 072much to like and to dislike in the film’s almost 90 minutes.

This project has the sponsorship of a number of well-thought-of Canadian institutions, as well as Jacobovici, the Naked Archaeologist. About Jacobovici, scholarly opinion is decidedly mixed, as is also the case with cryptozoology, whose adherents figure rather prominently among the DVD’s “experts.” At the same time, I hasten to point out, the leading spokesperson throughout Beasts of the Bible is Timothy Beal, a Case Western Reserve professor whose judgment strikes me as sober and sound. (He is also very photogenic, which is not alas a sure criterion for authority, as witnessed by the snippet from a professional mermaid, who avows, not unsurprisingly, that real merpeople probably do exist.)