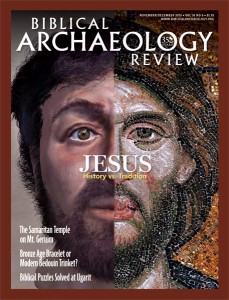 Hebrew is a “language of Canaan,” says the prophet (Isaiah 19:18), a conclusion amply confirmed by archaeologically recovered inscriptions. In scholarly terms, Hebrew is a south Canaanite dialect.

As with the language, so with the alphabet: From its earliest appearance until the Babylonian destruction, Hebrew was written in the Canaanite alphabet.1

As with language and the alphabet, so with culture generally: Ancient Israelite culture was in many respects a subset of Canaanite culture.

The most powerful and extensive demonstration of this last statement comes from the body of literature uncovered at the site of Ugarit on the Mediterranean coast of Syria. The discovery of Ugarit has a certain fairytale typicality to it. A peasant was plowing below the tell of Ras Shamra in 1928 when he struck a solid mass, which later turned out to be a stone covering to a tomb. The French authorities—in charge of Syria at the time—were alerted, and in 1929 archaeologists from France, headed by the now-famous Claude F.A. Schaeffer, began the first season of excavation. The French have continued to dig at Ras Shamra until today, although with more involvement from the Syrians in recent years.