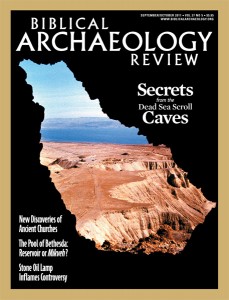 In 2001 or early 2002, we were asked, but declined, to publish an article about an unusual ancient oil lamp. The lamp has surfaced once again in the archaeological world. So I now describe it in the present tense:

The lamp is unusual in several respects. First of all, it is made of stone. Almost all of the thousands of recovered ancient oil lamps are made of clay; stone oil lamps do exist, but they are rare and survive in mere fragments. Unlike clay objects, stone objects are not subject to impurity, so ritual holiness is assured.

Secondly, this oil lamp seems to be much larger and heavier than any other ancient oil lamp ever discovered. It is round and nearly 9 inches in diameter; it weighs nearly 4 pounds.

Third, it has seven spouts or nozzles, rather than the usual single nozzle. Seven is of course a special number in Jewish historiography, and a few other seven-spouted objects, including lamps, although rare, have been recovered. The seven spouts in this oil lamp are arranged equidistantly around the lamp, which, together with a round handle, create an octagonal symmetry.