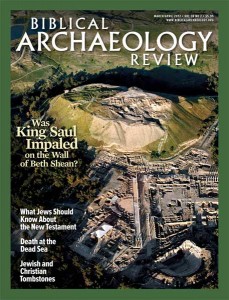 Little figurines are ubiquitous in the ancient Near East, including in ancient Israel. Almost all of them are made of clay. A few are made of plaster and painted—like the one pictured here. Many more plaster figurines probably existed, but they have not been preserved. Plaster crumbles; clay is well-nigh indestructible, even if only small pieces endure for ages.

The plaster figurine, from the Hecht Museum at the University of Haifa, was acquired from a local antiquities dealer in Israel, so it was probably manufactured locally. It dates to the Roman or Byzantine period.

Painted in red and black, the woman wears a floor-length tunic with a red neckband. The roundels on her shoulders are repeated near the bottom of her skirt. On the bottom edge of the tunic is a band with triangles, colored red like the neckband. The woman has large eyes with eyebrows and wears a red cap. Between her breasts she holds a large egg-shaped object. But what is it?

And how was the figurine used? What was it used for?

One scholar who has studied these plaster figurines has suggested they should be identified as “domestic idols, amulets or children’s toys,” which is to say, almost anything. The scholar who studied this particular figurine, Renate Rosenthal-Heginbottom, who has taught at the Hebrew University and digs at Tel Dor, quotes another Israeli scholar, Raz Kletter, who has studied Judean figurines: “All the following explanations should be rejected: toys, mortal figures, mother goddess, 015 nurturing goddess, fertility goddess, [etc.]”