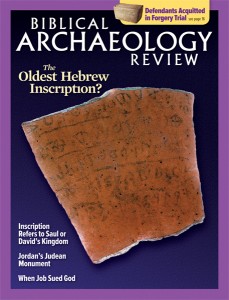 Four contenders vie for the honor of the oldest Hebrew inscription. To decide we must determine (1) whether they are in Hebrew script and/or language and (2) when they date. Not easy!

The first contender, the already famous Qeiyafa Ostracon, was discovered only in 2008 at Khirbet Qeiyafa, a site in the borderland of ancient Judah and Philistia.a The five-line ostracon (an ink inscription on a piece of broken pottery) is not well preserved and is subject to varying readings.

As the Qeiyafa Ostracon is a recent find, so the Gezer Calendar is an old one. It was discovered exactly a hundred years earlier, in 1908, by Irish archaeologist R.A.S. Macalister at Tel Gezer, between Jerusalem and Tel Aviv. It describes agricultural activities over a 12-month period. Inscribed on a piece of soft limestone, it is sometimes supposed to be a schoolboy’s ditty.

The third contender, like the first one, was recently discovered (2005), but it is not composed of words. It is what scholars call an abecedary, that is, an inscribed alphabet, sometimes thought to be a young scribe’s practice work. The Tel Zayit 033 034 Abecedary, named for the site south of Jerusalem where it was found, is incised on stone.