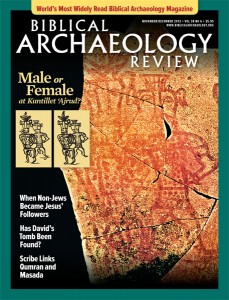 I recently had lunch with Victor (Avigdor) Hurowitz, a distinguished professor of ancient Semitic languages at Ben-Gurion University of the Negev. He is firmly convinced that the Jehoash (Yehoash) Inscription, which comes from the antiquities market, is a forgery. In this, he is in agreement with another scholar I greatly admire, Edward Greenstein of Tel Aviv University.

Hurowitz is quick to admit, however, that if the 15-line inscription describing repairs to the Temple is authentic, it would be enormously important—for the history of the Biblical text, for understanding the development of the Hebrew language, for Hebrew epigraphy, etc., to say nothing of the fact that it would also be the only known example of a royal Israelite (actually Judahite) inscription.

Hurowitz’s equally distinguished colleague at Ben-Gurion University, Chaim Cohen, has written at great length on why the inscription could well be authentic. But the fact is that almost all Hebrew language scholars (philologists) agree with Hurowitz. So for purposes of this discussion, I will assume that Hebrew language scholars as a whole regard it as a forgery.