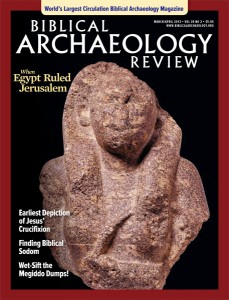 An extraordinary archaeological exhibit opened on February 12 at the Israel Museum in Jerusalem. It marks the journeys of two men separated by 2,000 years. One journey was the funeral procession of King Herod the Great—feared, hated and lionized—whose monumental works still mark the landscape of Israel; the other journey was the life work of renowned Israeli archaeologist Ehud Netzer, who described Herod as “a king who lived and breathed the art of construction, deeply understood its ways and, quite simply, loved to build.” In fact, one might fairly say that Netzer himself lived and breathed the man and the works of Herod.

Intermittently over 40 years, Netzer excavated at Herodium, Herod’s Judean desert fortress, exposing for the first time, below the conical mountain, the palatial pleasure palace with its pools, decorated bathhouses, and hints of lush gardens, as well as the 1,200-foot-long leveled area resembling a race course.a In 2007 Netzer and his team identified the burial place of Herod that had eluded them for decades on the flank of the mountain, above the end of the course. Only then did it become clear that the course was planned and built by Herod for his own burial procession.

Herod died in 4 B.C.E. at his winter palace in Jericho. The 25-mile procession from the throne room in Jericho where the king’s body lay to his tomb in Herodium became the organizing concept for the Israel Museum’s Herod the Great—The King’s Final Journey.