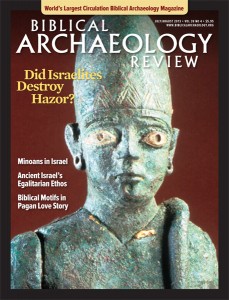 The Biblical writers had a clear sense that human civilization as they knew it had first flourished in the east, in the lands of Mesopotamia, modern Iraq. The stories of Creation, the Garden of Eden and the Flood were all born of well-known Mesopotamian traditions that had been around thousands of years before the authors of Genesis weaved them together into a timeless tale of Israel’s origins.

Uruk: 5,000 Years of the Megacity, now on display at the Pergamon Museum in Berlin, highlights extraordinary and never-before-seen finds from the ancient Mesopotamian city of Uruk, one of the world’s first cities and the place where many of the Bible’s oldest traditions may have originated. First settled more than 5,000 years ago, Uruk had nearly 40,000 inhabitants at its height in the early third millennium B.C.E. and was once ruled by Gilgamesh (depicted above in a neo-Assyrian statue), whose legendary feats and adventures were later mythologized in the famous epic that took his name.

The exhibit also celebrates the 100-year anniversary of the site’s excavation, which began under the German Oriental Society and continues today with the work of the German Archaeological Institute. The long-running excavations have uncovered valuable evidence of how urban life developed in the Near East and have recorded some of the world’s earliest temples, palaces and monumental public buildings. Given the poor preservation of many of the city’s mudbrick monuments, the exhibit uses dynamic three-dimensional reconstructions to display how the city and its buildings would have looked 5,000 years ago.