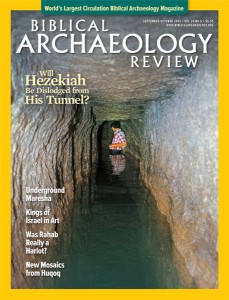 Can you hit the jackpot twice in a row? Not likely. But we did!

In the January/February 2013 BAR, we reported on the extraordinary finds uncovered in our excavation of the fifth-century C.E. Huqoq synagogue in Galilee. We thought that would be it at least for a while.

But here we are to update you on the 2013 season—with photographs of the new synagogue mosaics.

Another Samson was found south of the one featured in our previous article. In this one Samson is carrying the gate of Gaza on his shoulders (above), as related in the Biblical text. The gate is paneled. Samson’s hands steady the gate on his shoulders:

At midnight [Samson] rose up, took hold of the doors of the city gate and the two posts, pulled them up, bar and all, put them on his shoulders, and carried them to the top of the hill.

Below a break in the mosaic, the lower part of Samson’s body is preserved, with a red belt around his waist and a red cloak behind his back. Adjacent to Samson are one or more riders with horses, apparently representing Philistines.